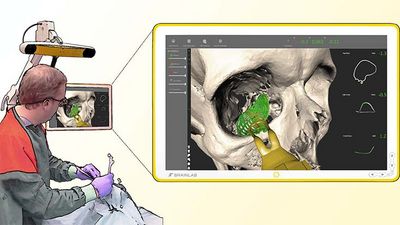 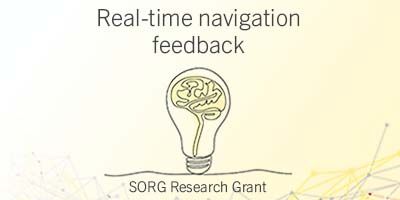 The Advanced Concepts of Orbital Reconstruction team in the Amsterdam UMC work hard to find better ways to place an orbital implant accurately and predictably during surgery. So far, navigation has been the method of choice to insert the orbital implants according to the previously made virtual surgical planning.

Various markers on the implants itself are indicated to assess the real position of the implant in comparison to the desired position. The surgeon needs to pay attention to the patient, quantitative navigation information and qualitative information simultaneously and would often feel more like an air-traffic controller looking at information on the screen than the pilot steering the implant to the correct position.

At this point, there is no live tracking of the implant and no real-time instruction on how to correctly position the implant. The surgical team needs to place the implant first and can measure its position and judge on its accuracy only afterward. Repositioning the implant is again performed without navigation guidance. This makes the process quite cumbersome, slow and prone to errors.

Supported by the SORG Research Grant, the team has designed a special navigated insertion instrument that connects to the implant and can be tracked in the OR. Combined with a dedicated orbital navigation software, real-time instructions on how to move the implant in order to reach the desired position can be provided, similar to navigation in a car. The surgeon is supported by feedback from insertion to fixation; the instrument can be disconnected from the implant afterwards.

A test series on fixated human cadaver heads was undertaken to compare the new navigation method to the existing one. These tests showed very promising results: Real time navigation proved to be 40 % faster and lead to more accurate implant positioning. The results were published in the Int. Journal of Oral and Maxillofacial Surgery in 2020 and included in the PhD thesis of Ruud Schreurs (Transformation in Orbital Reconstruction), which he defended with honours on October 1st, 2021.

In the future, the team aims to improve the standard of the insertion instrument and software to industrial values with the help of industrial partners. In the future, neighbouring techniques as augmented reality and robotics that could advance positioning ease and reduce error may be more easily introduced as an expansion on real-time navigation.

The foundation of SORG was closely linked to the development of load-sharing osteosynthesis techniques. These small and light carriers of biomechanical stress meant a paradigm shift in contrast to the previously well-established rigid fixation plates. It was only logical and consequent that the foundation of SORG was subsequently associated with research and development tasks of the new alternative of osteosynthesis.

With the years going by and miniplate osteosynthesis technique establishing itself as the golden standard of osteosynthesis worldwide, the focus on pioneering R&D engineering shifted more and more towards the second pillar of SORG: Teaching and education. In recent years, our meetings were mainly dedicated by the community’s plans of transferring knowledge to the field. In 2016, the SORG Board decided to strengthen the “R” (which stands for Research) in its name again by offering an annual grant of 15,000 € for pioneering research and development projects arising from the SORG environment. Now, it is time for a review on the first 5 years and some of the awarded research projects during this time. We picked out 3 of them and followed up on their later development.