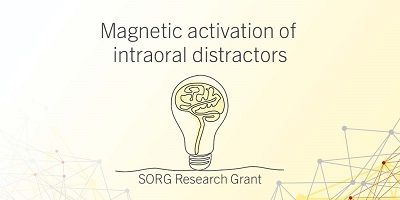 Today’s distraction devices are usually small and internal (intraoral). Their activation is usually done by an internal activation rod that is led transmucosally to the vestibulum. This can however be quite cumbersome and disturbing for the patient as the vestibulum is often fairly reduced in its dimensions. Bending the activation rod or using mechanical joint connections may hinder proper force transmission to the distractor corpus with the possibility of damaging the activation mechanism itself or might be irritating for the patient.

There have been various ideas of overcoming the purely mechanical activation and using alternatively more sophisticated techniques for fully buried devices such as distractors driven by electric motors, shape memory alloys, hydraulic or spring-assisted ones which were either too complicated, less reliable, or simply not financially affordable.

The team of Natacha Kadlub and their co-workers from Hôpital Necker in Paris considers a different approach: They want to apply a precisely defined torque created by the magnetic field of an external activation device. Rotating the device will lead to a simultaneous rotation of the internal counterpart and will therefore activate the distractor itself. That means an indirect activation without a physical connection between the activation device and the distractor itself.

After first trials in prototype studies applying mechanical testing and fine-tuning the activator, first human cadaveric studies were carried out. Already in 2016, the team published the results of their SORG Research Grant supported analytical studies in the Journal of Cranio- Maxillofacial surgery. After the encouraging results in a test lab series, implantable prototype devices were manufactured according to ISO13485 and tested on cadavers. The next step is to conduct biocompatibility testing and clinical trials, which will require new financial support.

The foundation of SORG was closely linked to the development of load-sharing osteosynthesis techniques. These small and light carriers of biomechanical stress meant a paradigm shift in contrast to the previously well-established rigid fixation plates. It was only logical and consequent that the foundation of SORG was subsequently associated with research and development tasks of the new alternative of osteosynthesis.

With the years going by and miniplate osteosynthesis technique establishing itself as the golden standard of osteosynthesis worldwide, the focus on pioneering R&D engineering shifted more and more towards the second pillar of SORG: Teaching and education. In recent years, our meetings were mainly dedicated by the community’s plans of transferring knowledge to the field. In 2016, the SORG Board decided to strengthen the “R” (which stands for Research) in its name again by offering an annual grant of 15,000 € for pioneering research and development projects arising from the SORG environment. Now, it is time for a review on the first 5 years and some of the awarded research projects during this time. We picked out 3 of them and followed up on their later development.